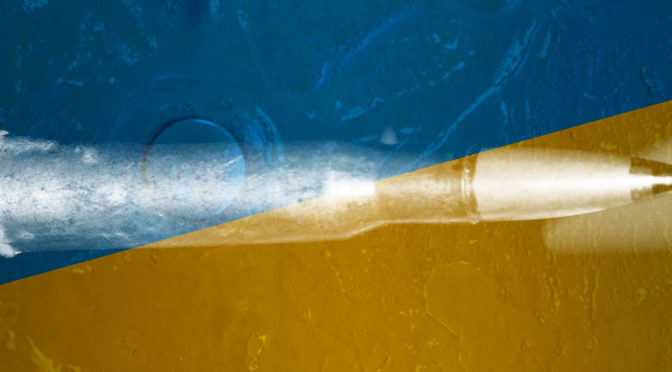 On the 18th of February the OSCE SMM spot report 1/2020 notifies of a marked peak in the number of ceasefire violations in the area, including over 2 300 explosions.

Since early morning hours that day Finnish Peace Committee  started to receive calls from civilian residents of settlements located on the side which is not controlled by Ukraine.

People were asking to draw attention to severe shelling of residential areas. People claimed it was not the side of the self-proclaimed entities which initiated the shelling. Some of them also sent videos taken with their mobile phones. There was also information received from a civilian resident of the shelling of the village of Yasnoye of Donetsk region yesterday, February 17th, between 6 and 7 pm local time.

The reports continued to come throughout the day. A contact person living in the village by Trudovskaya mine at the outskirts of Donetsk wrote, ”The village was under fire in the morning. 5 or 7 shots, very close to where I live. Therefore, I had to return home. Thanks God, no visible damage but the electricity is now off which means the line is damaged. The day was endured in fear”.

In the village of Golubovskoye which is located near the town of Kirovsk a civilian was reported to be wounded and six houses being seriously damaged.

On February 19 at around 6:30 am a message came from a contact person from the village of Yasnoye (Donetsk part not controlled by Ukraine): ”The village is again under fire. It is the time for the school bus. Some of the children were afraid to get on the bus. They are walking now. The fire is deliberately opened at this time”.

All these reports were immediately taken to the attention of the international monitoring missions to Ukraine, the OSCE SMM and the UN Human Rights Monitoring Mission. Both missions responded that they would do all needed to corroborate the received reports.

At around 9:17 am Telegram-channel @marochkolive stated that the side of Lugansk armed formations launched response fire at positions of the Ukrainian armed forces in the area of Kirovsk. Soon after that the chief headquarters of the UAF made an announcement that they ”have won over the Russian troops”. The Ministry for Defence and Ukraine’s Security Council announced a press briefing for 12 am in Kiev.

The press briefing started with 30-minute delay. It was streamed alive. President Zelensky also took part in the briefing. The other two participants were the head of the UAF headquarters Khomchak and the secretary of Ukraine’s Security Council Danilov. All its participants tried to persuade that nothing extraordinary had actually happened, that the ”Ukrainian army is strong” and managed to ”keep their positions intact withstanding the advance of pro-Russian forces”.

General Khomchak also admitted that the advancing units of the Ukrainian armed forces ”had to withdraw as it was necessary to target the area”. It added to the confusion among the journalists. Which side was advancing and which was withdrawing? President Zelensky repeated the thesis of the powerful army, paid condolences to the families of the killed soldiers and left the room. All the participants sticked to the thesis of the events being ”a provocation which has already past”. They did the utmost to oppose journalists pushing for the answers confirming the pro-war agenda.

A few hours later Sergey Sivockho, the advisor to the National Security Secretary of Ukraine, stated that he had to postpone the presentation of the National Platform of Reconciliation and Unity. It had been scheduled for February 19th.

The UN Security Council held their meeting on the situation in Donbas the same day. The meeting was requested by Russia on occasion of the fifth anniversary of the Minsk II agreement. The debate was overwhelmingly highjacked by disagreement on which one of the sides was to be blamed for the spark of violations earlier that day.

Sergey Sivokho in his Facebook statement explained the reasons to postpone the presentation of the Platform by ”the provocation which occurred in the vicinity of Zolote”. The Finnish Peace Committee already covered worsening of the situation in the area after the claims of the successful withdrawal of armed forces. Sivokho in his statement didn’t use any single expression to point out the culprit.

Several other Ukrainian human rights defenders did the same. For instance, Valeria Vershinina wrote in her Facebook, ”The attempts to rock the situation at the contact line both in Donetsk and Lugansk regions which happened yesterday can be regarded as a provocation. But then what are the names or positions of provocateurs? Who has enough resources and influence to organise a simultaneous attack in the area of four or five settlements? Who finances the provocateurs? What about the plans to bring the responsible to account?”.

The Finnish Peace Committee has been in communication with several sources within the UAF. The communication was organized by Alexander Medinsky, ex-Ukrainian military, now political refugee in Finland. They tell, ”Usually it is our side that shoots with that side not responding. What actually happened yesterday was unexpected artillery response from Lugansk”. They added that ”in Ukraine those rule who have the control over the army or their own army. This is not Zelensky”.

Another source, a Ukrainian humanitarian activist based in the vicinity of the Stanitsa Luhanska checkpoint, told, ”The situation near Zolote has been extremely tense after the announced withdrawal. Actually, we all here see it is the UAF which created pretexts to invite response fire. This time they instead of adherence to all reached agreements installed a new advanced post from which they didn’t just observe the enemies’ positions or the village but held fire”.  Both sides responded to the provocation of February 18th with criminal cases opened. Ukraine’s Security Service blamed all on Russia while Russia accuses Ukraine of sabotaging Minsk Agreements.